My friend Ken – by Alex Montgomery

Alex Montgomery has added a fuller tribute to his great friend and colleague Ken Jones, who passed away this week.


"It was obvious when Ken phoned a few days ago that all was not well. Maybe as well as those of us in regular contact with him had been fearing. The voice was weak. Yes he had been in hospital. Again? I wasn’t certain of his reply.  He was ok now and no he had not watched the football. The wee Welsh terrier who would defend his beliefs with a tenacity that could shock was strangely benign. The call was short. That is not Ken Jones.

A call from him could occupy anything from half an hour minimum to two hours no maximum and would involve insights into his life as a youngster in Wales, his love of family,  his worship of the men he knew and who toiled for coal, his life as a youngster growing up in Birmingham when his folks moved there, his national service as a PE instructor and his desire to follow the family trade and become a professional footballer -- an ambition he achieved.

He would tell stories about his first steps in journalism, a move that was lucky for him and eventually his papers, of reporting the great game that was so much part of his DNA.

On a good day and most of them were good he would recall matches and incidents going back to the sixties about his fellow players at Southend or wherever, of his managers, learning the game as a coach more thoroughly than any other journalist at the time.

He would slip in stories about Billy Nich at Spurs, Alf with England, of The Don at Leeds. None was for publication because it was private between him and them and would stay that way.  He would decide. He would fight his battles with his Fleet Street bosses though god knows he wouldn’t call them that. You didn’t boss Ken.  And anyway his papers would benefit from his unique knowledge over the many years he worked for them.

Ken was the most likeable of men, a man of strong views who would listen to all arguments. Fools? That’s different. Many is the fool who tested his patience and had no chance of being suffered gladly. These would include the occasional big sports name. Celebrity was no defence for Ken.

He was the master of his craft, the finest of sportswriters who fitted comfortably into that elite group recognised as the greatest of their era – in his case any era.

Who else but Ken would take a phone call from Sir Alf Ramsey then manager of England after they had won the World Cup and be asked to estimate how many players he felt had the quality good enough to play for the country? Ken came up with the figure of thirty-five which he passed on. Alf said 'thanks' then added it was three more than he as England manager had on his list.

Don Revie was an old and very close friend who made a point of meeting him whenever possible but always before Leeds United played in London.

The Don would glean as much information as he could about this player and that and what was happening in the London scene.

Who else but Ken would be confidante to so many others at the very top of the game, players like Terry Venables and George Graham who set up a tailors business with him to supplement wages that were nothing like today's earnings.

Ken has the distinction of being highly regarded on both sides of the fence; as a journalist and one whose opinion was sought by football insiders.

It was on Ken’s advice as an example, one of many, that Middlesbrough gambled - and it was a gamble at the time - on signing the young Graeme Souness from Spurs.

It was a far different game to report on back then than in these days, where press conferences now dominate and too few real friendships have the opportunity to develop.

To those of us football writers a generation behind him Ken was a towering professional figure and friend deeply respected, a man who, newspaper rivalry apart, operated an open house policy.

He would never be considered expansive in company, that wasn’t his style, which was dignified for sure.  But to listen to him in full flow with a fine wine on the table happily dispensing stories was one of the pleasures of the job.

He was generous, giving, a man who loved company and chat and would talk expertly and entertainingly on any sport – boxing and the majesty of Muhammed Ali would incite his senses - but especially football, a no-brainer for a man born into the Welsh mining family Jones that produced the likes of the great Cliff Jones.

Ken was one of the first journalists to make inroads on radio and television match reporting but it was his insightful writings and his brilliant columns for the Independent that will be remembered.

That and the courage of a man who lost an arm in a train accident that could have killed him and the very next day was on the phone to Terry Venables asking when they could fix a lunch date.

Ken refused to accept old age – he would have been 88 next month -- as a reason for not travelling to London to meet old friends, although that became a trial for him in his last year. He missed our FOTY Dinner which as a former chairman and long standing member he considered unarguably one of the highlights of the season.

I can speak for many when I say Ken was special as a journalist and a man and will remain special not just for his family but all privileged to enjoy his company." 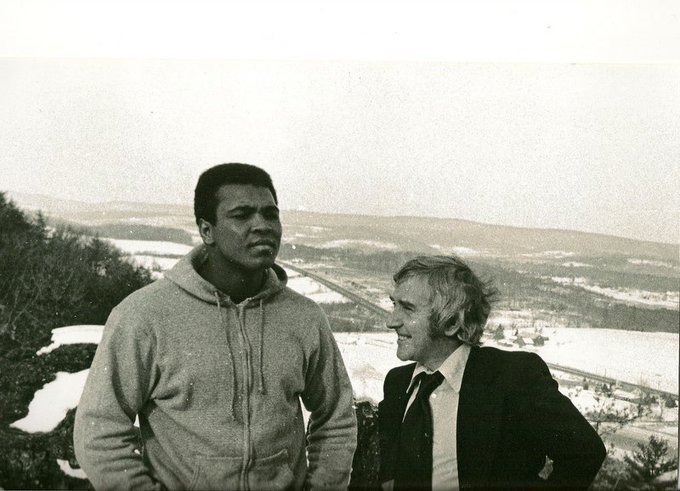 2 thoughts on “My friend Ken – by Alex Montgomery”