"Ken Jones – the late, great Welsh sports bard Ken Jones – will not mind me telling this story about his funeral on October 22.  I promise it will lift your spirits.

Thanks to the meticulous planning of his daughter Lesley-Ann (an exceptional writer in her own right), we gave Ken a rousing Welsh send-off; Abide with me, of course Cwm Rhondda, a reading of Dylan Thomas’s Villanelle recorded by Richard Burton, and a suitably moving-mixed-with-Cockney-humour eulogy by doyen of boxing writers, Colin Hart. True, proud Welshman Ken certainly did not “go gentle into that good night.”

The final fond farewell was staged in front of a standing-room-only congregation of family, friends, gnarled old Fleet Street colleagues and – in particular for this story – two once-idolised international footballers who had been rivals on the football fields of the 50s and 60s … Ken’s flying winger cousin Cliff and 1966 World Cup hero George Cohen.

As the adorable Kathy Jones, Ken’s wife for the little matter of 64 years, led their small army of children and grandchildren out of the Chapel at Beckenham Crematorium, the focus of our attention – Ken – was still lying in his coffin. Kathy decided she did not want to see that chilling moment when the curtains close.

I found myself standing alongside the departed sportswriting master, reminiscing with Cliff and George, of whom both Ken and I had written about many times in the previous century when they were opposing each other for Tottenham and Fulham and England and Wales.

“I gave him a few kickings in our day,” George said with an old rascal’s smile as he leant on his zimmer frame that he uses like a chariot of fire.

“Come off it,” I said. “He was like greased lighting. You got nowhere near him.”

“Oh no,” said honest Cliff, “George was one of the few full-backs who was as quick as me. It was always a sprinting match when we payed against each other.”

Cliff, at 84, is still built like a Welsh whippet. “You look as if you could play for Spurs tomorrow,” I said.

This took a while to sink in. George Cohen. “Eighty today.” Arguably England’s greatest ever right back, and a true miracle man who has been fighting cancer since he was in his 30s. Eighty today.

He and Cliff – old rivals, old friends – hugged each other. Two champions of the football field united in octogenarianism.

Instinctively, with Ken in his coffin behind me, I said aloud like a ring announcer to the hundred or so mourners who had not yet left the chapel: “Excuse me, friends, I know Ken will not mind me telling you this, but this man here – the great George Cohen – is eighty years old today. Eighty!”

Everybody loudly applauded in what was a surreal moment. And I swear I could hear Ken joining in the applause.

I later got a telling off from the lovely Lesley-Ann … not, I’m happy to say, for my appalling etiquette but for not calling the family back in so that they could have sung ‘happy birthday’ to George,

“My Dad would have loved that,” she said. “It’s just the sort of thing he would have done.”

I know, Lesley. Like Colin Hart, I travelled the world with him and he better than anybody knew a good story that needed telling.

This was too good a story not to tell. George Cohen eighty, and Cliff and Ken Jones there to share the joy. 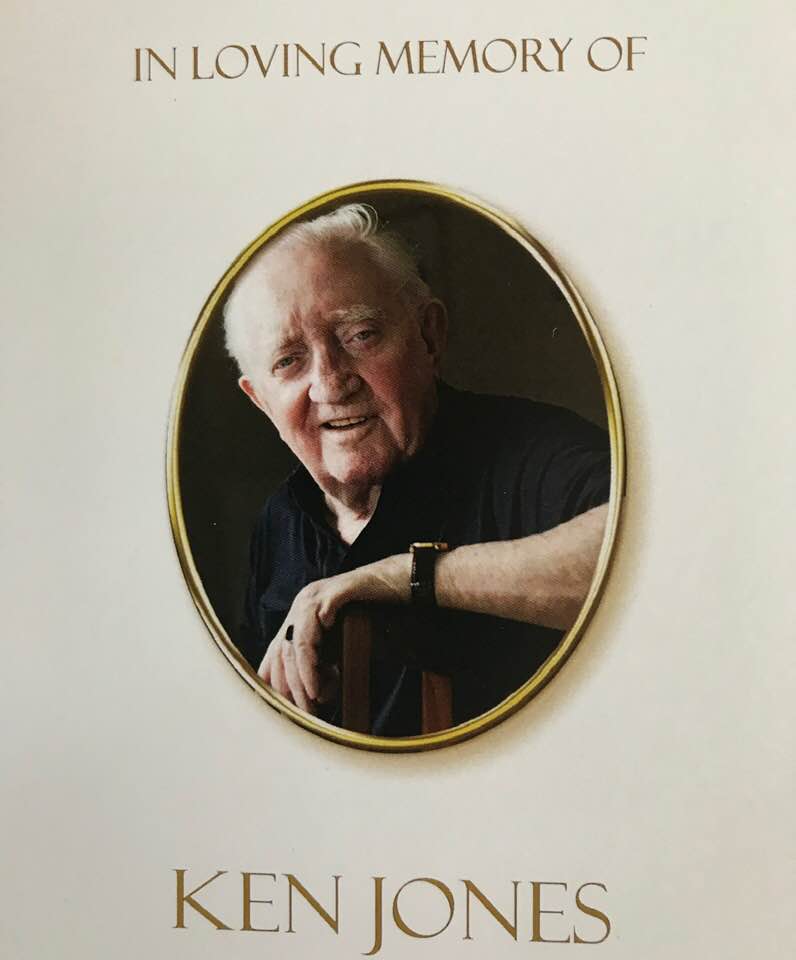