Vinnie Jones signs up to support life-saving partnership with Prostate Cancer UK which returns for a second season.


The Vanarama National League, which sponsors the FWA's annual Golf Day,  has once again changed its name in the opening half of the season - all for a great cause – Prostate Cancer UK. For a second successive season, the fifth and sixth tiers of the English game, including clubs like Notts County, Barnet and Wrexham, will be known as the MANarama National League until 9th November.

The League’s sponsors, van leasing company Vanarama, long-time supporters of Prostate Cancer UK, have again agreed to use their sponsorship in support of the leading men’s health charity. Last year, in an award-winning industry first, the National League rebranded mid-season with the ground-breaking MANarama campaign raising over £150,000 to help stop prostate cancer being a killer and earning a host of industry awards. From September to November this year, the forward-thinking firm will reprise their striking MANarama branding and will be working with all National League clubs to help them smash last year’s total.

To monitor fundraising progress, Vanarama has set up an alternative MANarama League table, which will track each National League club’s fundraising over the course of the campaign. In the drive to save lives, clubs raising cash for the cause will be in with a chance to win a brand-new minibus for the next three seasons. Hollywood hardman Jones, a former Wealdstone midfielder, has been signed up by Vanarama Chief Executive Andy Alderson to support the campaign this year.

Speaking about the campaign, Vinnie says: “I am beyond proud to back this MANarama campaign. It combines two things which are so important to me; grassroots football and fighting cancer. I started playing football in non-league so I know that these clubs are at the heart of local communities. I don’t need to explain why the fight against cancer is so important for me. Non-league football is proper football and I’d urge all non-league clubs and all the proper supporters out there to raise some proper money for this brilliant cause.”

Jones was at Vanarama’s head office in Hemel Hempstead on Tuesday afternoon with Prostate Cancer UK ambassador Kevin Webber and Errol McKellar, two men affected by the disease, who will play a key role in the campaign in another industry first in October.

The former FA Cup winner was visibly touched after hearing former mechanic Errol’s story and waved off ultra-marathon hero Webber as he set off on an epic walk to the live-on-BT Sports MANarama opener between Dover Athletic and FC Halifax Town on Saturday evening (5.20pm).

Webber will be a familiar face to BT Sports viewers after delivering the match ball on the final day of the MANarama campaign in October 2018, at Halifax, so in a fitting narrative will help kick off this season’s campaign.

Vanarama Chief Executive Andy Alderson, says: “The National League is the backbone of English football and we’re delighted to once again re-name it the MANarama League in support of our long-term partners Prostate Cancer UK. For many years we’ve stood side by side in the fight against prostate cancer and want the football world to come together and raise more money than we ever have before to help beat a disease killing one man every 45 minutes in the UK.”

National League Chief Executive Michael Tattersall, comments: “We were extremely pleased with the reaction to our temporary – and historic - rebranding to the MANarama National League during the 2018/19 campaign. It was fantastic to see so much money and awareness raised to aid the fight against prostate cancer. We are proud this will be taking place over a 45-day period for a second season.

“Prostate Cancer UK are our official charity partners and we couldn’t think of a charity that better reflects our football values. This deadly disease has no boundaries, so it’s been incredibly inspiring to see Kevin Webber raise so much awareness. He’s a remarkable man doing remarkable things and we will continue to stand alongside him, and everyone affected by prostate cancer.”

Prostate Cancer UK Chief Executive Angela Culhane, adds: "Last year’s brilliant MANarama campaign really caught the imagination and we’re delighted to strengthen our long-standing relationship with Vanarama ahead of another exciting few months. The fight against prostate cancer, a disease that kills one man every 45 minutes, is a purpose worth uniting for, and this fits in perfectly with our ‘Men, we are with you’ mantra;  Vanarama, The National League and the Non-League community getting together to do something amazing in our quest. Money raised will help us fund more ground-breaking research and find the tools needed for a screening programme, in order to catch more prostate cancers early and save more lives.”

One man dies every 45 minutes from prostate cancer meaning a staggering 1440 men will die from the disease during the MANarama campaign, highlighting just how important it is that more people are made aware of the most common cancer in men.

The campaign will also encompass Non-League Day on 12 October, an annual date on the football calendar, backed by Premier League and Championship clubs which this year celebrates a tenth anniversary. The day is always scheduled to coincide with an international break and provides a platform for clubs to promote the importance of non-league football. 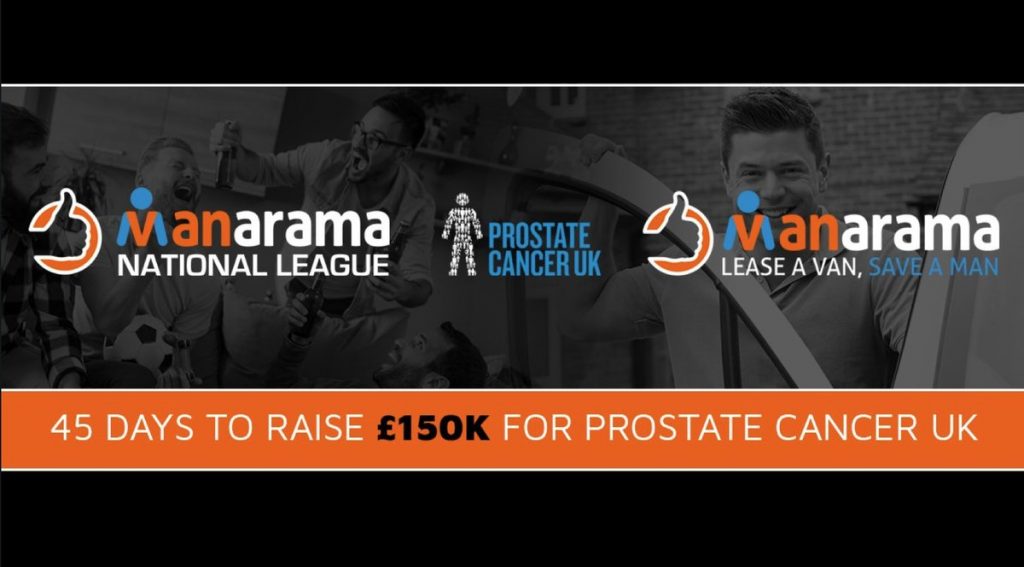