Our season at Ebbsfleet United began 10 months ago, and 46 games later we have achieved what we set out to do - securing a place in the Vanarama National League playoffs.

Two weeks ago, our win against my former club, Eastleigh FC, extended our unbeaten run to eleven games and edged us ever closer to securing a chance to play off for a place in the Football League. However, our next match against Sutton United saw our opposition also desperately in need of a win - and they succeeded.

The atmosphere was electric at Stonebridge Road, with 3,000 passionate fans packed into the stadium watching every kick of the ball. Unfortunately for our fantastic supporters, the away side grabbed all three points with a 1-0 victory in our final home game. Although the loss was deflating, we knew that four points from our final two games would cement a playoff spot and therefore our fate was in our own hands.

Firstly, we made the dreaded journey to Gateshead for our Tuesday night fixture. Whilst Liverpool dominated Roma to win 5-2 in the Champions League, we similarly wore red and won convincingly with the same scoreline, except it was in the Vanarama National League.

Gateshead FC is 300 miles from Stonebridge Road and I can assure you that at 11pm after a football match, the journey home is not what your body needs. It would have been made easier if our final game of the season had been a local away match; sadly it was at Torquay.

Preparing for the match, we knew that one point would be enough to extend our season and give us a chance of playing at Wembley. The match was a scrappy affair against the already relegated side and it was evident that tiredness began to creep in towards the end of the game. In the second half, Jack Connors gave us the lead with an arching finish from a tight angle and although Torquay equalised two minutes later, the 1-1 score line gave us the result we needed.

The point in our last game of the season meant that we finished 6th in the table, setting up an exciting playoff game against Aldershot. What an evening it was, on the same Wednesday night as Liverpool's triumphant semi-final second leg in Rome.

The days leading up to the game seemed to drag. I had never been involved in a playoff match before and I was excited by the prospect. When we arrived at Aldershot's Electrical Services Stadium, we were confident of winning despite the fact that we were underdogs.

From kick off, we allowed Aldershot to control possession, trusting that they wouldn’t be able to break us down because of our shape and work ethic off the ball. Our tactics worked and the biggest chance of the game fell to Danny Kedwell from the penalty spot. Our number nine uncharacteristically missed, however, and the score was 0-0 after 90 minutes.

I was taken off just before extra time began and it was agonising to watch from the bench, especially when the home side took the lead with a glancing header from their striker, Nicke Kabamba. With two minutes left on the clock, I thought the season was over until our captain, Dave Winfield, equalised with a powerful header at the back post. I jumped off the bench to celebrate, a moment my swollen knee didn’t appreciate.

Penalties ensued and it was tense, gripping and a rollercoaster of emotions. After three penalties, we were losing 3-1 and the game was all but over. However, Aldershot failed to score their last two penalties which allowed Norman Wabo and Danny Kedwell to keep our playoff dream alive. In sudden death, Lewis Ward, the Aldershot keeper stepped up and missed but Dean Rance did not make the same mistake as he coolly slotted home and sent us through to the Vanarama National League Playoff Semi Final.

The celebrations were brilliant in front of our faithful supporters, yet I didn’t exactly appreciate the kiss from a fan with the strongest beer breath I have ever smelt. Having said that, the celebrations are now over as we prepare for the semi final on Saturday against Tranmere, live on BT Sport.

For great deals on van and car leasing visit:  http://www.vanarama.co.uk/ 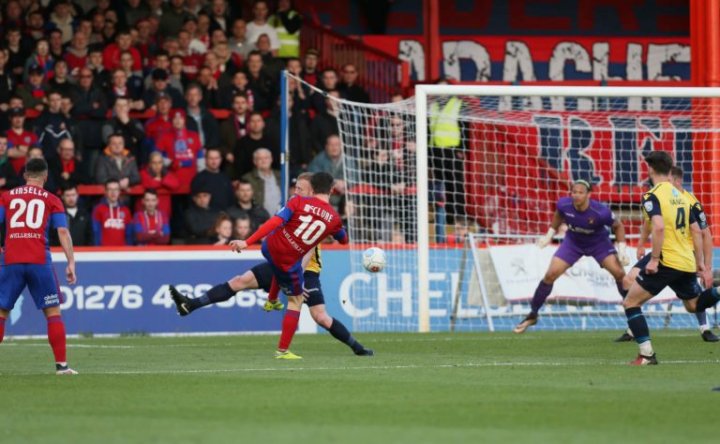 One thought on “Play-offs, Sudden-Death and Beery Breath”