Brackley Town - racing to the top, by Glenn Moore.


Football puts places on the map. Blackburn businessmen noted that, after Rovers won the Premier League in 1995, clients in far-away places were more familiar with the town. Talking football provided them with an opening gambit.

The Northamptonshire town of Brackley is the base of Mercedes-AMG Petronas, the F1 team of Lewis Hamilton, Britain’s four-time world champion. Its proximity to Silverstone means it has long had close links to globally recognised names. However, motorsport’s focus on drivers, cars and sponsors, rather than production locations, means few people outside the immediate environs will know of a town whose population is less than 15,000 and has no railway station.

Awareness, however, is growing, thanks to the local football team. Until recently Brackley Town had an unremarkable history. Founded in 1890 they played in county leagues until 1977, using a local pub as a dressing room as late as 1968. Until 2007 they had not played beyond the eighth tier or reached the FA Cup proper. However, in the last decade the Saints have begun to make headlines. In the FA Cup they have twice beaten a Football League club – Gillingham on both occasions. In the league they began to make a mark, winning promotion to the Conference North and establishing themselves there.

Harrogate, who pushed champions Salford City, the club revived by a quintet of Manchester United legends, all the way, will start favourites in the play-off final. They are full-time and at home. Bromley, making their first appearance at this stage since winning its precursor, the FA Amateur Cup, in 1949, will also be favourites. Former Gillingham and Fulham midfielder Neil Smith has fashioned a good side that just missed out on the play-offs for a Football League place.

But Brackley are growing used to upsetting the odds. They attract average crowds of little over 500 to St James Park but finished well ahead of such relative giants as Stockport County, York City and Darlington. In the FA Trophy Kevin Wilkin’s team have already defeated two Vanarama National League clubs, Sutton United and Barrow.

Wilkin took Wrexham to the FA Trophy final three years ago, only to be unexpectedly beaten by North Ferriby United on penalties. A former Northampton Town player he has been at Brackley since September 2015 finishing 19th (after inheriting a poor start), seventh, and now third. Making the difference this season has been Aaron Williams whose 36th goal of the campaign saw off Bradford Park Avenue in Sunday’s play-off semi-final. Williams is only 24 but has already played for ten clubs at six different levels of the pyramid from Walsall and Peterborough in League One to Romulus of the Northern Premier League Division One South, picking up an England C cap on the way. Young enough to have a third stab at full-time football he, like his club, now has two finals to put his name in the public eye.

For more on the Vanarama League visit: http://www.thenationalleague.org.uk/

For great deals on car and van leasing, visit: http://www.vanarama.co.uk/ 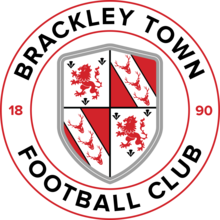