Football is brutally ageist. Once a player passes his mid-twenties, unless he is already a success, his chances of career progression decline rapidly. Clubs, with an eye to sell-on fees, are generally reluctant to pay high prices for anyone who would be nearing 30 when their contract ends. Even the poster boy for late developers, Jamie Vardy, was only 25 when Leicester City paid £1m to take him out of non-League. He was a gamble, but the likelihood was he would continue to improve, although few expected Vardy to be such a success.

Add a few more years, however, and players are thought to be, if not quite over-the-hill, certainly nearing the brow. And yet, in an era of conditioning coaches, nutritionists and all-round enhanced professionalism it seems rash to write off a player who could have another five years in him.

Consider Danny Rowe, briefly a team-mate of Vardy at Fleetwood Town. Rowe is the most prolific scorer in the Vanarama League having scored more than 150 goals for AFC Fylde in the past five seasons. This has been noticed. Oldham bid £50,000 for him in summer 2017. Cheltenham bid £175,000 in summer 2018. On both occasions Fylde, only a dozen years out of the West Lancashire League, turned the bids down. Though Rowe is keen to play in the Football League he accepted the decisions and kept on scoring. The dream of both player and club is to go up together.

At the weekend Rowe scored goals number 20 and 21 this season as Fylde won 2-1 at promotion rivals Solihull Moors. That followed the 48 goals in Vanarama National League North in 2016-17, which propelled the Coasters to promotion, and 28 goals last season as Fylde reached the play-offs.

If Rowe seems in as much a hurry as his club it is with good reason. Time is not on his side. On January 29 Rowe enjoyed his 30th birthday, a questionable landmark in an industry which confers veteran status on 30-somethings.

However, in playing terms he is not so ancient. A prodigious scorer as a boy, so much so he joined Manchester United at 11, Rowe quit the game at 16, released by United after falling out of love with the grind. He took up a joinery course and played for fun, at amateur level. Soon the goals began to flow again. Fleetwood signed him, but while he did OK on loan to Droylsden and Stockport he failed to score for Fleetwood. They preferred Vardy, though Rowe occasionally played alongside the future England international in 2012.

It wasn’t until Rowe arrived at Fylde, in August 2014, that it clicked. “He’s found a place where he is comfortable and his goalscoring record over the last for or five years has been outstanding,” said Fylde boss Dave Challinor after Saturday’s win. “He has ice in his veins. His calmness in and around the box is amazing. He is not bothered if he misses a chance and rarely celebrates when he scores – he just sees it as what he is there to do.”

If Rowe and Fylde win promotion to the Football League, it will be just reward.

For great deals on van and car hire and leasing visit: https://www.vanarama.com/

For more on Fylde visit: http://www.afcfylde.co.uk/ 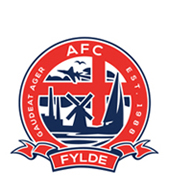