As we remember the Manchester United players and officials who perished in Munich 60 years ago, it is worth recalling the eight journalists who died in the air crash that day.

Roy Cavanagh and Carl Abbott have written a remarkable book detailing the lives of those men, called “The Day Two Teams Died”, which is available from Amazon.  We caught up with Roy to discuss what was, for a lifelong Manchester United fan, a labour of love:

“I am 70 now so I was ten years old at the time of the crash and had already been supporting United since 1954. I’ve written 20 or so books on football and cricket, but I wish I had been a sports journalist. I often speak at after-dinner events and had the pleasure of meeting the late Frank Taylor, who was the only journalist to survive the crash. He had written “The Day a Team Died” and when we spoke it seemed to be a glaring omission that the eight journalists who died that day had not been commemorated.

“I come from a generation when journalists were treated like gods, in the days before blanket coverage of sport on television and radio. You got all your information about your favourite teams and players from newspapers, and the written word was gospel. So some of these journalists were as famous as – if not more famous than – the players. Henry Rose was the most flamboyant of them and he would drive to games in his Jaguar. Only one of the United players had a car at the time, and that was a Morris Minor!

“Manchester had two papers, the Evening News and the Chronicle. Tom Jackson wrote for the former, Alf Clarke for the latter. I grew up in Salford and we would read the Daily Herald, which was the working man’s paper. George Follows was their correspondent.

“Henry Rose was such a big character that over 4000 people went to his funeral, and taxi-drivers in Manchester refused to take payment for anyone going to or from it.

“Frank Swift, the former England goalkeeper, did not really need to be on the flight because he wrote for a Sunday paper, the News of the World, but he was great mates with Matt Busby, who had done him a special favour by getting him along. The players looked up to big Frank and adored him.

“Eric Thompson of the Mail was another fine journalist, but my favourite was Donny Davies of the Guardian, who had played amateur football for England and cricket for Lancashire. He was a beautiful wordsmith, someone I loved to read.”

Frank Taylor was the only one to survive, and so Roy Cavanagh and Carl Abbott felt it appropriate to echo his book’s title in theirs.

“We drew together as much as we could find, from their earliest writing up to the last reports they filed, and what followed; the respect and tributes that were paid to them after the crash. In our minds this was always going to be a lovely tribute, and we believe it is.”

David Walker, the Mirror sports editor, FWA member and chairman of the Sports Journalists’ Association, has written the foreword, and half of the profits will go to the Journalists Charity.

This fine book can be ordered on Amazon: http://amzn.to/2E6o5Cj 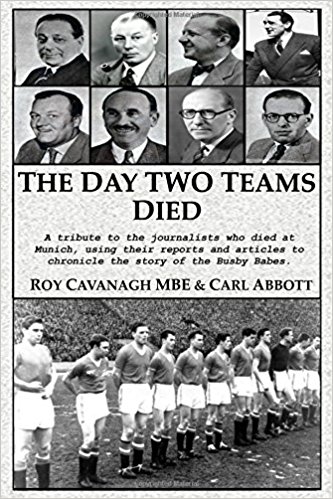