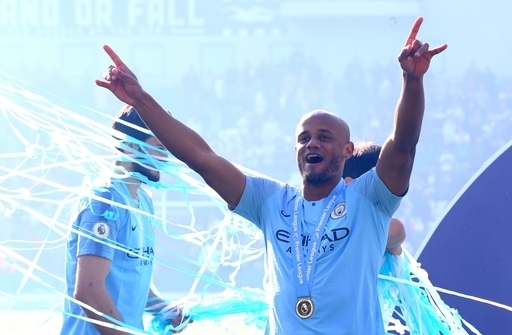 Please note that the FWA Tribute Night for Vincent Kompany has a change of date, brought forward from Jan19 to SUNDAY JANUARY 12. This is because Belgian TV requirements have led to a re-scheduling of Anderlecht’s game on the 19th.

All other details remain exactly the same and those who have booked tickets and tables at our annual Savoy event will be receiving tickets and passes within the next 10 days.

As a matter of urgency, can you please let Paul McCarthy, FWA Executive Secretary, know if you are NOT able to take your allocated table or tickets.

Our sincere apologies for the change but it was completely out of our control.

The FWA’s National Committee chose to honour Kompany not just for his outstanding contribution to English football, having won every domestic trophy (four PL titles, two FA Cups and four League Cups) but also for his charity work, not least via Tackle4MCR, a co-operation with the Mayor of Manchester’s office to tackle homelessness in the city.  He also studied for and gained an MBA when he was in Manchester, and is a FIFA ambassador for the SOS Children charity.

Kompany wlll travel to London on January 12 to collect his award in what is sure to be a star-studded event and memorable night.

You can see a list of previous winners of the FWA Tribute Award here: http://footballwriters.co.uk/previous-tribute/