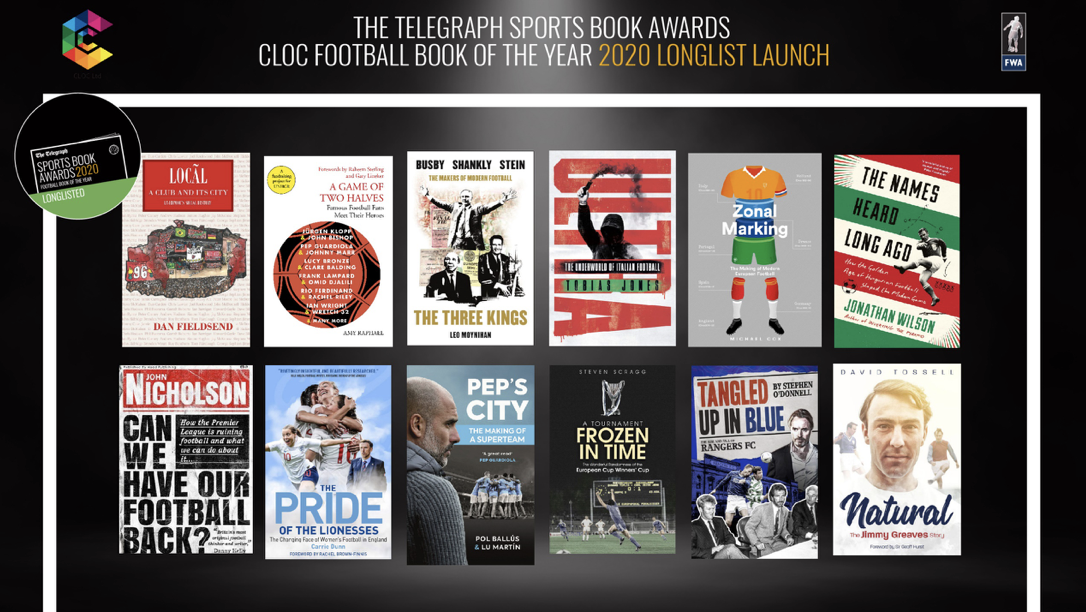 The 12 titles chosen by the FWA for the longlist of the Football Book of the Year award have been revealed. The FWA books committee has chosen the 12 titles below and congratulate the authors.  They will be further reduced to a shortlist for the final award, which is due to be held at Lord’s Cricket Ground in September, along with other Sports Books of the Year.

Sponsored by CLOC Printing, the Football Book of the Year is one of 10 Telegraph Sports Book Awards categories. The directors of the Telegraph Sports Book Awards have made the regrettable decision to postpone this year’s shortlist and winners events, but are pleased to announce they will take place later in the year, with a September date soon to be confirmed for the annual winners’ ceremony at Lords Cricket Ground.

Carrie Dunn’s superb deep-dive into the changing face of Women’s Football, The Pride of the Lionesses, looks beyond the headlines, reflecting on growth at grass roots level, as well as that of the professional game. Tobias Jones delves into a facet of Italian footballs subculture, examining the sinister side of footballing fandom in Ultra. Daniel Fieldsend’s Local looks at Liverpudlians uniquely intertwined relationship with both the City of Liverpool and their beloved football club.

Jonathan Wilson’s excellently researched assessment of how Hungarian football in the 1950’s shaped the modern game, The Names Heard Long Ago, is up against Michael Cox’s Zonal Marking, an insightful overview of tactical development in European football over the last three decades. Leo Moynihan’s The Three Kings tracks the life and careers of three of the greatest ever managers, Stein, Shankly & Busby, undoubtedly the central architects of the modern game. The tactical theme continues with Pep’s City, Spanish journalists Pol Ballus & Lu Martins’ behind the scenes profiling of Pep Guardiola’s success at Manchester City. David Tossell’s Natural, makes the longlist with a revealing and comprehensive biography of a past superstar, one England’s most loved footballers, Jimmy Greaves.

Steven Scragg pays homage to the European Cup Winners Cup with Frozen In Time, charting its distinct history through the unique, eccentric stories it created. Amy Raphael’s, A Game of Two Halves, pairs football’s superstars with their celebrity superfans, resulting in plenty of funny conversations and revealing some uplifting commonalities. Completing the shortlist are Stephen O’Donnell’s brutally honest account of the rise and fall of Rangers FC, Tangled Up In Blue, and John Nicolson’s Can We Have Our Football Back?, a polemic against the premier league, including a passionate pitch for an alternative future.

Philippe Auclair, Chair of the Football Writers Association Books Committee, commented: “One of the most striking features of this longlist is the sheer variety of the selected titles, which shows how football writing continues broadening its horizons from year to year. In this regard, this season’s crop is probably the most diverse and the richest in the award’s history, with twelve outstanding books dealing with a huge range of interests – from biography to sociology, tactical analysis to history, polemic and politics to women’s football, to name a few. “

The winners of the 2020 Sports Book of the Year Awards will be announced at a gala awards dinner to take place at Lord’s Cricket Ground in September, with the exact date to be confirmed shortly.

Alongside CLOC Printing, The Telegraph Sports Book of the Year Awards partners include VAARU Cycles, Pinsent Masons, Sky Sports, Tim Rice’s The Heartaches & The National Literacy Trust. The final short lists for the 2020 Sports Book of the Year Awards will be announced at a reception in Pinsent Masons London Headquarters. As with the main ceremony, we have regrettably decided to postpone the original May date, and will confirm the rescheduling as soon as possible.

Autobiography of the Year

International Autobiography of the Year

Biography of the Year

Children’s Sports Book of the Year

Cricket Book of the Year

Cycling Book of the Year

Illustrated Book of the Year

Rugby Book of the Year