Congratulations to Fran Kirby, who has won the FWA Women’s Footballer of the Year award again, having been the inaugural winner of our award in 2018.

With 25 goals and 18 assists in all competitions so far, the 27-year-old has been brilliant for the newly crowned FAWSL champions and the partnerships she has formed, particularly with Australian striker Sam Kerr, have proven too hot-to-handle for defences both at home and across the continent.

Kirby’s tally of six goals leads Chelsea’s scoring en route to the club’s first-ever UEFA Women’s Champions League Final, including two strikes in their scintillating semi-final second leg success at home to Bayern Munich. Seven days later she netted twice in her side’s 5-0 win against Reading, thus retaining Chelsea’s title on the final day of the season. That’s a personal best of 16 top flight goals and a joint-league best this year with 11 assists.

The women’s winner is chosen by a panel of over 30 experts who specialise in the women’s game and usually takes the form of a two-stage poll that has proven a very close decision in recent seasons. However, it was apparent from the initial round of voting that Kirby was going to be, on this occasion, a straightforward and unanimous choice.

Considering the illness and setbacks she endured and overcame in 2019/20, being sidelined for six months with pericarditis and unsure whether she would or could ever return to the professional game, this season is as much a triumph of spirit, desire, hard work and the support around her, as it is of Kirby’s undoubted talent. 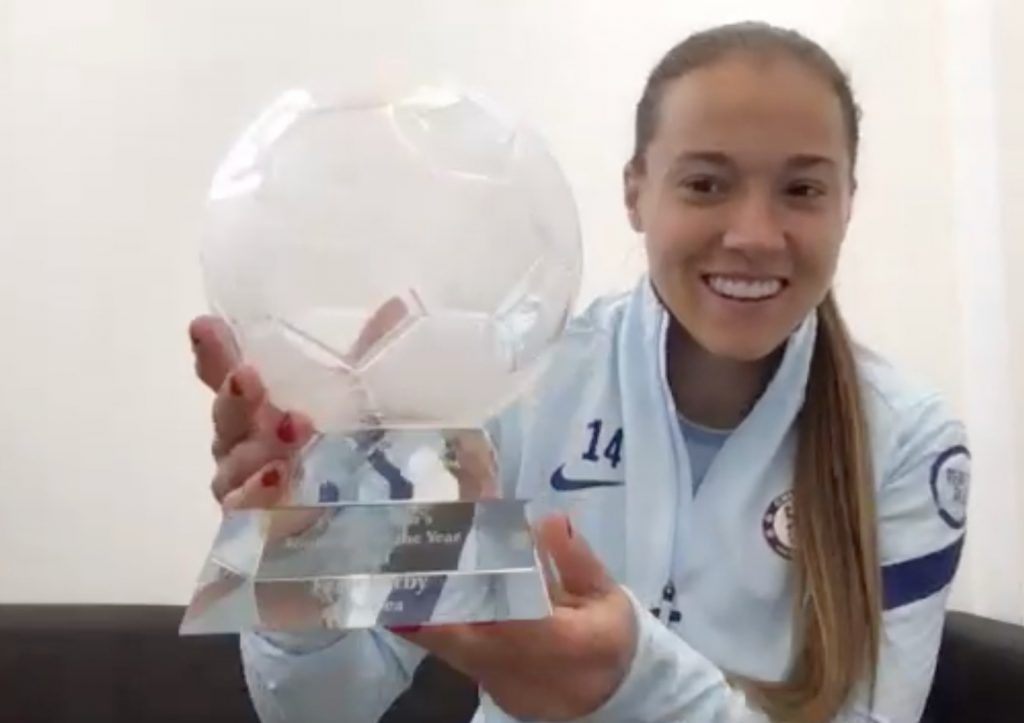 Chair of the FWA’s women’s sub-committee Jen O’Neill said: “In an era when so many issues and opinions in society are divisive and divided, it’s a testament to Fran’s personality and attitude to the game, as well as her technical ability, ruthless finishing prowess and selfless playing style, that she unifies football fans and media professionals alike. To have overcome a serious health condition and return in such sparkling form is admirable and inspiring. Several players, including many of her Chelsea teammates, have been outstanding in a superb WSL season but there are fewer more joyful sights in football than a smiling, fit and firing Fran Kirby.”

Unsurprisingly, the aforementioned Kerr – the WSL’s Golden Boot winner with 21 goals – was second in the poll. Between them, “Kerr-by,” as fans are affectionately describing the duo, have combined to score 52 goals this season.