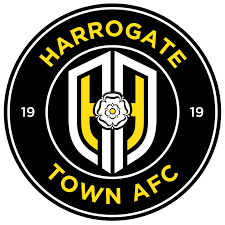 At first sight Harrogate Town’s climb to the summit of the Vanarama National League appears a story to irk non-League folk. Construction millionaire father owns the club, son manages it. Conversations are imagined:

You get the drift. It used to be a train set for Christmas, now it is a centre-forward.

The rise of the Sulphurites is not, however, as simple as that. To begin with Simon Weaver was manager for two years before father Irving bought the club. This wasn’t the case of an indulgent Dad buying his son a new plaything, it was more a supportive parent investing in his son’s ability, and enabling him to continue in business. As Irving, owner of Doncaster-based Strata Homes, told The Times this week, “I’ve got another son who’s in my main business. Why shouldn’t [Simon] deserve the same opportunity? He’d earned it. He’d already shown that he could do it.”

Simon Weaver, a former Sheffield Wednesday trainee who had two seasons with Lincoln City, but mostly spent his playing career in non-League, had demonstrated his management abilities during two difficult seasons at Wetherby Road having become player-manager at the age of 32 in 2009.

Harrogate had already flirted with glory. Under owner Bill Fotherby and manager Neil Aspin, respectively former Leeds United chairman and player, they had climbed from Northern Premier League First Division to the Conference North play-offs, and made several appearances in the FA Cup Proper. But then the cash began to run out. Aspin, now manager of League One Port Vale, moved on and Weaver arrived to a shrinking budget. In his first season the club finished bottom but survived due to others’ financial problems. In Weaver’s second season Harrogate were mid-table.

However, Fotherby, by then 80 years old, had had enough. Weaver senior came to the rescue. With a fortune estimated in excess of £150m he could have immediately bankrolled a series of promotions into the league but has been more prudent, investing to increase cashflow rather than simply writing cheques. As at fellow Vanarama clubs Sutton, Maidstone and Bromley the 3G pitch has enabled the club to play host to hundreds of local players, especially youngsters, building links with the town. This, plus success, has helped swell attendances from around 200 in 2011 to 1,709 at the weekend. Planning permission was granted in April to redevelop the ground taking capacity from 2,800 to 5,000.

Now, having 19 points from seven matches a place in The Football League is suddenly coming into view. Given Town were only promoted through the play-offs last May it is a stunning start.

“No-one is getting carried away, we’re trying hard to keep the players grounded because we have to keep raising the bar,” said Weaver junior after the weekend’s 3-2 win over Havant & Waterlooville, “but you have to enjoy the moment.”

Accusations of nepotism, oft-muttered in the early days, are rarely, if ever, heard now.

For more on the Vanarama National League see: http://www.thenationalleague.org.uk/

For great deals on cars and vans visit: http://www.vanarama.co.uk/