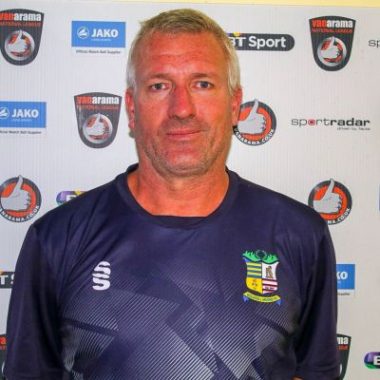 Tim Flowers going against tradition and succeeding in management as a goalkeeper, by Glenn Moore

The most eye-catching result in the Bank Holiday Vanarama National League programme was at Damson Park where Solihull Moors became the first team to defeat early-season front-runners Wrexham.
In front of a bumper 2,412 gate, three times last season’s average, the West Midlands club won with Alex Gudger’s late goal. That delighted Tim Flowers whose first season at the Moors helm has begun promisingly.
Goalkeepers have traditionally not become managers. While there are some notable historic exceptions such as Raymond Goethals, Dino Zoff and Tony Waiters those that did – even outstanding players such as Ray Clemence, Peter Shilton and Neville Southall – were rarely successful. Perhaps the most celebrated ex-English keeper with a management role was Brian Clough’s assistant, Peter Taylor. Goalkeepers, it seemed, were regarded by chairmen, media, fans, and maybe themselves, as too detached from the outfield players, too individualistic, to be managers.
That view, though, may be changing. The current Real Madrid boss Julen Lopetegui was a ‘keeper along with Wolves’ Nuno Espirito Santos, Nigel Adkins of Hull, former Hull and Russia manager Leonid Slutsky, now at Vitesse Arnhem, and David James, currently of Kerala Blasters.
Flowers, like Shilton, Clemence, Waiters and James, is a former England No.1. The 51-year-old was the most expensive goalkeeper in Britain when Blackburn paid Southampton £2.4m in 1993, a move that paid off when Rovers won the Premier League title. Flowers won 11 caps and made 500 league appearances before moving into coaching. Initially, like so many former keepers, he was a specialist teaching his old role, but he became assistant to Iain Dowie at Coventry, QPR and Hull.
He took his first crack at management in October 2010, at Stafford Rangers, then of the Conference North, but resigned after nine matches. He returning to coaching and pitched up at Moors last November as assistant to Mark Yates.
At the time Moors looked doomed having taken 11 points from 19 matches after a rapid turnover of managers. As late as Boxing Day Moors were bottom, 12 points adrift of safety. However, the pair oversaw a revival that garnered 37 points from the last 20 matches enabling Solihull to stay up in comfort.
This revival prompted Macclesfield to hire Yates for their return to the Football League, John Askey having moved onto Shrewsbury Town after leading the Silkmen to the Vanarama National League title. Flowers, who had been interviewed for the post separately from Yates, before the board suggested they work as a pair, stayed at Damson Park.
“The great escape ranks as one of my biggest achievements in football, and now to have the opportunity to build on everything we achieved last season is the icing on the cake,” said Flowers. “This club’s got ambition, make no mistake.”
These are heady times for Moors. Formed by a merger of Moor Green and Solihull Borough in 2007 neither the club nor its predecessors have never finished above 16th in the fifth tier. With Moors currently in the play-off places history beckons
ends