We were saddened to hear of the death of Brian James, the former Mail and Sunday Times writer, who passed away last week at the age of 87. He was a former FWA member and one of the finest sportswriters of his generation. He was particularly well remembered for sticking to his prediction, against pressure from executives at the Mail, that England would win the World Cup in 1966.

Brian Scovell worked closely with him and wrote this tribute:

Brian James, one of Fleet Street’s greatest all round sports writer died on his 87th birthday, leaving wonderful memories of his brilliant work. Calm and quietly spoken, he was the son of the founder of The Credit World, Edward James who died when Brian was only two. He started out as an office boy in the Murdoch organisation in Fleet Street, joined the Walthamstow Guardian and in 1962 JL Manning spotted his talent and gave him a job at the Daily Mail.

When the Mail was merged with the Daily Sketch in 1971 Brian was one of the casualties but was soon signed up by the Sunday Times. In 1975 he became a feature writer with the Mail again before Tom Clarke lured him away to The Times. When he retired he gained an MA in maritime history at Greenwich University.

If you had to compare him with football managers, you would nominate Walter Winterbottom, a nice guy with an intellectual bent. A giver. 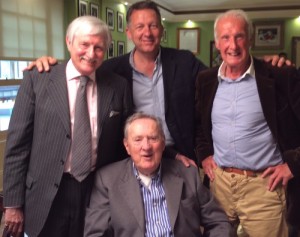