To mark the 60th anniversary of the Munich airliner crash that cost the lives of 23 passengers returning from Manchester United’s European Cup quarter-final in Belgrade, FWA chairman Patrick Barclay remembers the journalist victims. Eight of the nine football writers aboard died. Only Frank Taylor, of the News Chronicle, survived along with the photographer Peter Howard and Ted Ellyard, who had wired Howard’s pictures back to the Daily Mail.

Archie Ledbrooke, a former chairman of the Football Writers’ Association, was among a group of journalists who regularly covered Manchester United at home and abroad. But according to my late friend Peter Thomas, who was the northern sports editor of the Daily Mirror in 1958, Ledbrooke might have been a notable absentee from the trip to Belgrade via Munich.

Thomas had been pestering Ledbrooke for delivery of a long-promised series on Joe Smith, Blackpool’s veteran manager, and had given the writer an ultimatum: finish it or be replaced on the flight by Frank McGhee. With only a couple of days to spare, Ledbrooke had filed. McGhee stayed at home.

Frank Swift was another member of the press gang who might not have boarded United’s Elizabethan at Ringway Airport, Manchester, one cold and misty Monday morning in February 1958. “Swifty”, a genial giant and goalkeeping great who had played alongside Matt Busby for Manchester City, had been originally assigned by the News Of The World to Wales’s World Cup play-off second leg against Israel in Cardiff the same day. But Busby arranged a free trip on the United plane for his old friend.

There was a certain irony in this, for Wales were managed by Busby’s assistant, Jimmy Murphy, while Busby himself had agreed to manage Scotland in the World Cup that summer. Busby had insisted Murphy see his national team safely through to the tournament – having won 2-0 in Tel Aviv, they were duly to achieve the same score at home – rather than accompany United to their European Cup quarter-final second leg against Red Star.

At any rate Swift had gone to Belgrade, where United had extended a 2-1 lead from the first leg to 5-1 before the interval. In the end they had to cling on for a 5-4 aggregate but it was a happy party who gathered the next day: Thursday, February 6. The journalists had an extra reason to be in good spirits. They were looking forward to that night’s Manchester Press Ball.

On the first leg of the trip, Belgrade to Munich, Frank Taylor was teased as he stood in the gangway, big Swifty shouting out orders for cigars and brandy. “You shouldn’t look so much like a waiter,” the rotund, twinkling Eric Thompson of the Mail told Taylor, who had slicked-back hair and a little moustache.

The Daily Express’s flamboyant Henry Rose – such a showman that, when he went to Anfield, he would doff his hat in appreciation of the Kop’s taunts – fretted because he had to finish his precious “postbag”, a column of candid answers to readers’ letters, before going to the Ball. The Manchester Evening Chronicle’s Alf Clarke was snoring. “He must have been reading one of his own stories,” observed the Daily Herald wordsmith George Follows.

The other local-paper man, representing the Manchester Evening News as usual, was Tom Jackson, and the contingent was completed by the Manchester Guardian’s much-loved and highly literate H. D. “Donny” Davies, whose work appeared under the byline “An Old International” in recognition that he had been an England amateur.

When they landed for refuelling and refreshments in the terminal building at Munich, the weather had worsened. There was snow and slush on the runway. Two attempts to take off for Manchester failed and the mood on the Elizabethan became sombre. It lightened when Alf Clarke, who had gone missing in order to telephone a story about the delay to his paper, was ferried by jeep to the plane; his colleagues pretended to be observing two minutes’ silence for him.

As we know, the third take-off attempt was to fail disastrously. Peter Howard and Ted Ellyard emerged from the wreckage virtually unscathed, but Frank Taylor suffered multiple injuries and, like Matt Busby and others, underwent prolonged treatment in hospital in Germany. Even he was lucky compared with the other journalists, all of whom died. As FWA Life Member David Meek, who replaced Tom Jackson at the Evening News, was to observe later: “They were from the cream of the sporting press, and very close to Manchester United because of the journey into Europe. Matt must have been devastated to lose them as well as the players.”

Below is the team-sheet from United’s game in Belgrade. 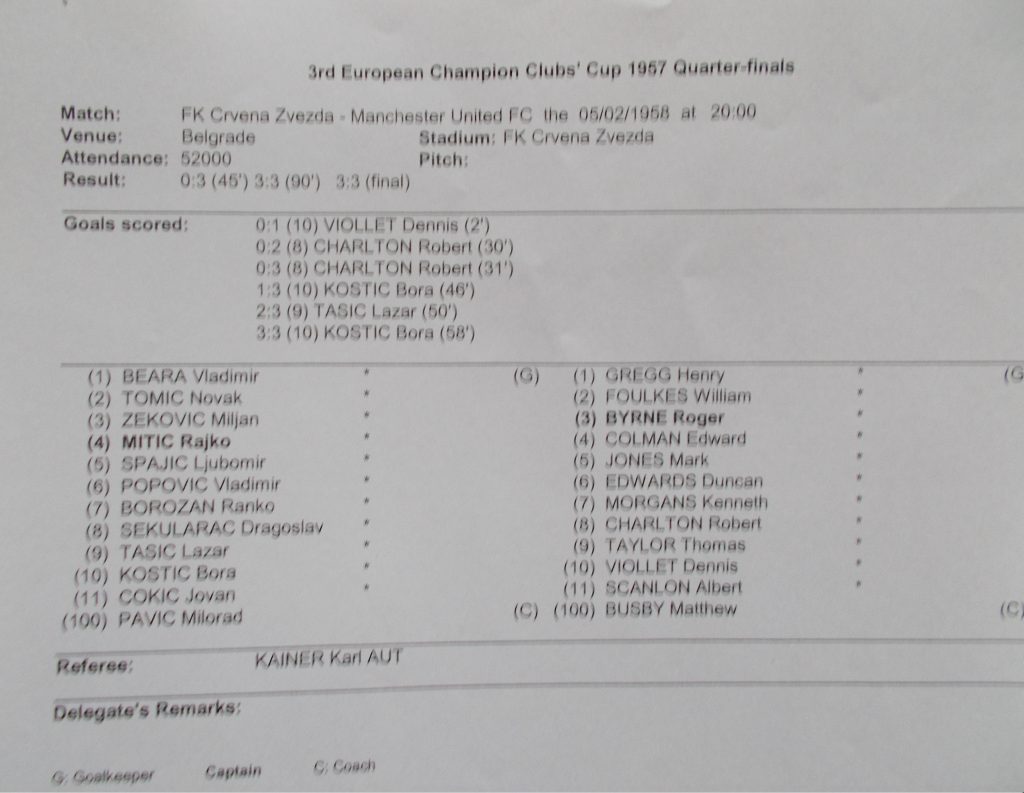