N’Golo Kante is the Footballer of the Year 2017, on the 70th Anniversary of the FWA and football’s oldest individual award.

Between them, Kante and Hazard polled more than 65 per cent of the votes. 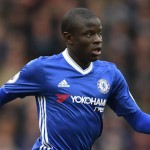 There was a record spread of 17 different players who received votes, with five of them from Chelsea (Kante, Hazard, David Luiz, Diego Costa and Cesar Azpilicueta)

Kante said: “It is a fantastic honour to win this award. With so many great players in this Chelsea squad and in the Premier League, for the Football Writers’ Association to name me their Footballer of the Year is a very proud moment in my career.”

“In the view of some FWA members, he would have been a worthy recipient last season for his contribution to Leicester’s title success, but the almost unbroken excellent form of Chelsea since he changed clubs has left little room for further debate.

“Considering the competition of Eden Hazard and other players from Chelsea in particular, this is a great achievement.”

Here is the full list of players who received votes this year, in alphabetical order…

You can see the full list of previous winners, starting with Sir Stanley Matthews,  here: http://footballwriters.co.uk/previous-foty/