The Football Writers’ Association paid tribute to Pele in a star-studded evening at the Savoy Hotel in London on Sunday.
Although the great man was suffering from exhaustion and unable to travel to the event as planned, a host of star names from the world of football and football writing paid tribute to the Brazilian legend, arguably the greatest player of all time.
Gordon Banks, England’s World Cup winning goalkeeper from 1966, spoke about ‘that save’ from the 1970 World Cup, when he kept out a header from Pele that the player – and the watching world – thought was a certain goal. It is still regarded as one of the greatest saves of all time, and Banks said: “When I saw Pele in London some time ago, he said: ‘Gordon, I go all over the world and people talk about the goals I scored, but when I come to England, all they talk about is that save!”
Gareth Southgate, in his toast to the FWA, said Pele had created so many iconic moments in football history. “To have watched his performances, to see the impact he had on the world stage was incredible. You could see the enjoyment he took from the game, as well as
the ability that he had.
“To have gone on to have been an incredible ambassador for the game in the way he has as well speaks volumes for the impact I think he has had, not only on football community, but right across the world as one of those rare iconic figures. You can travel to any part of the globe and people know who he was.”
Cliff Jones, the former Tottenham and Wales winger, talked about facing Pele in the 1958 World Cup, when the Brazilian was an unknown 17-year-old. “Our manager Jimmy Murphy had warned us about the great players we’d be facing, such as Garrincha. But we had no idea who this 17-year-old kid Pele was. We soon found out. He scored the goal that beat us, three in the semi-final and two more in the final. We knew then we were watching someone special.”
And Pele’s former New York Cosmos team-mate Steve Hunt spoke about playing alongside the great man in the final year of his illustrious career. “I was 20 years old and playing for Aston Villa reserves when the chance came to play in America,” he said. “When I was told my team-mate would be Pele, I said ‘Where do I sign?’ When I met him the first day, I was greeted by a huge smile and the biggest hug imaginable. He was the warmest, friendliest guy I could have hoped for.
“I played in his last competitive game ever, and after we won 2-1, we carried him on our shoulders, which was the greatest moment of my life. He was a genius as a player and also one hell of a human being.”
Hugh McIlvanney, who covered the great Brazil sides when Pele was at his peak, made an eloquent case for the 1970 World Cup winning team being the greatest side in the history of football and said: “There can be no failure to recognise that the very incarnation of the glories of Brazilian football then, and forever, was and is Pele.”
Patrick Barclay, FWA Chairman, paid tribute to Paul McCarthy and the national committee for their work in organising the evening, thanked our title sponsors William Hill for their support, and gave thanks to Boadicea the Victorious for their table gifts of luxury perfume.
We were also joined by members from the National Football Museum, who brought along some precious artefacts from their Pele exhibition, including the shirts he wore in 1958 and 1970. 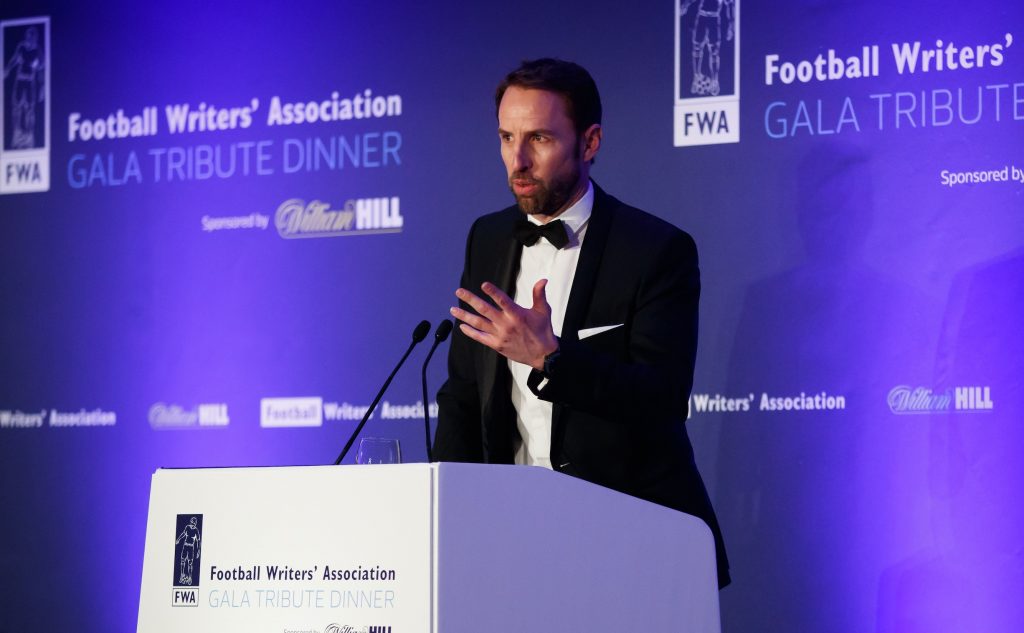