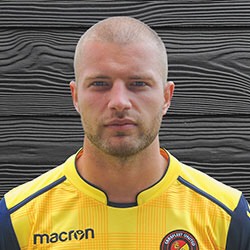 Throughout my career, I have heard senior players share different words of wisdom with younger team mates. Yet, there is one reoccurring quote of advice that every older player is in agreement upon; ‘Make the most of it, it’s over before you know it’.

At the beginning of the month, I stared at the smoke as it slowly dissipated from the candles atop my birthday cake, while pondering on those frequent words of guidance. It seems only yesterday that I was signing my first professional contract at the tender age of 18 and now I am beginning to see the truth in those words.

It is not always an easy thing to do – to enjoy the moment and savour it while you can. However, with nine games to go and the end of the season around the corner, I am determined to make the most of the games that remain.

After our fixture against Wrexham was postponed, due to poor weather conditions, we travelled an hour up the road to face Leyton Orient. Despite an unexpected season for the former League Two side, their home attendance has been one of the best in the Vanarama National League and once again more than 4,000 fans came to watch.

Unfortunately for those supporters, I have to admit that the game was far from the most exciting spectacle of the season. Corey Whitely opened the scoring after latching on to a Danny Kedwell header and his low shot gave us the lead after 15 minutes. Yet, the home side equalised soon after, when a low driven cross was unluckily turned into our own goal by our captain, Dave Winfield.

The second half was a dull affair with limited chances and the game finished 1-1. However, despite the lack of excitement, we were happy to take the point after our four previous wins and extended our unbeaten run to five games.

Disappointingly, we weren’t able to build on that momentum last weekend due to another cancelled fixture as Gateshead featured in the semi-final of the Buildbase FA Trophy. Therefore, we played a friendly against Eastbourne Borough to help us prepare for Maidenhead United, who visit Stonebridge Road on Saturday.

Now that I am 24, I am still aware that I have many years left in my career and I am far from wishing those years away. Having said that, I am now realising that the advice from the senior players is invaluable because just like my birthday cake; my career will be gone before I know it.

For more about the Vanarama National League visit: http://www.thenationalleague.org.uk/

For great deals on car and van leasing visit: http://www.vanarama.co.uk/