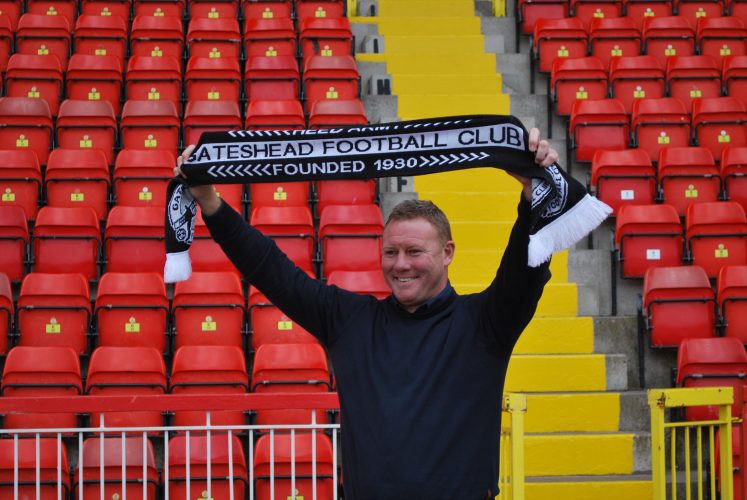 Gateshead International Stadium will stage a very local affair on Boxing Day, and enjoy an unusually vibrant atmosphere. The ‘Heed’ host Hartlepool in a rare Vanarama National League north-east derby with every expectation of a substantial four-figure gate.

It will be a significant match for Steve Watson, the former Newcastle United player who was lured back to his native north-east in October to take on his first managerial job. Watson, who made more than 350 Premier League appearances, for Everton, Aston Villa and West Brom, besides the Toon, has declared it his mission to take Gateshead into the Football League.

Watson, 43, had been assistant manager at table-topping Macclesfield, but seized the chance to replace Port Vale-bound Neil Aspin and come home. He returned to a region that, while noted as a football ‘hotbed’, has made little impact in the country’s premier non-league competition.

This is only the third season in the National League’s 39-year existence that there have been two clubs from the north-east in the league and there have frequently been none. The Northern League’s reluctance to join the original Alliance Premier League in 1979 meant several of the area’s bigger clubs were left behind as the football pyramid was formed. Blyth Spartans, of FA Cup giant-killing fame, were then dominant in the Northern League, but by the time they switched into the pyramid were playing catch-up and are yet to progress beyond Vanarama National League North.

Gateshead, who were formed in 1977 after the eponymous former Football League club, and its successor club Gateshead United, both folded, have the region’s most regular National League club with 20 campaigns in four stints. They were briefly joined by Darlington from 2010-12, and now by newly-relegated Hartlepool.

The holiday fixtures – the return at Victoria Park is on New Year’s Day – will be a good test of both teams’ progress. Watson has improved Gateshead’s results, but they remain lower-mid-table, eight points off the play-offs. Pool, anxious for an instant return, are one point ahead but have lost four on the spin. They play Saturday, at home to Maidenhead, while Gateshead have the weekend off.

It will also be a measure of the effect Watson’s arrival has had off the pitch. In many respects playing in a smart stadium refurbished as recently as 2011 has its advantages, but unfortunately the International Stadium is both designed for athletics and too big for non-League football.

At 11,800 its capacity is only exceeded by The Shay at Halifax. However, an average gate hovering between 750-850 is matched only by Boreham Wood. With only the two covered stands each side of the ground usually opened for Vanarama National League matches, and an athletics track around the pitch, fans often complain about a lack of atmosphere.

Proposals to build a new ground have been floated but Watson’s short-term solution is to copy the philosophy of his former manager Kevin Keegan. “We have to entertain, to get out on the pitch and play good football, to get positive results,” he said. “Then before you know it, there are more on the gate.”