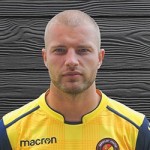 The baggy, yellow shirt of Beechwood Juniors hung loosely on my shoulders and was tucked into my oversized, green shorts as I ran around my first football pitch at the age of six. A year later, I shook the hand of Kevin Keegan before walking around Maine Road at half time to the sound of 30,000 fans applauding the new Manchester City academy recruits.

Since that day as a star-struck seven-year-old boy staring up at a sea of blue, my journey in football has been ever changing.

After ten years, a scholarship and appearances in the U19 Champions League, my time at Manchester City came to an end. After a brief spell in America, I signed for Cardiff City where I enjoyed two years of U21 football in the Welsh capital.

At the age of 20 and desperate to prove myself, I went off into the world to find first team football, yet only found rejection and six months of being a free agent. My perseverance prevailed, however, as I joined Oxford City in the Conference North. A year later, I was bought for the first time as Eastleigh negotiated a deal to take me into the Vanarama National League.

Three managers and 12 months on, I was bought for a second time as my career moved forward once more and I signed for Barnet in League Two.

After two managers in only six months and a lack of playing time, however, I returned to the Vanarama National League this summer and now wear the red and white of Ebbsfleet FC.

Fourteen games have passed since the opening day of the season and only eleven points separate the playoffs from the depths of the relegation zone. So it is no surprise that thousands of fans decide to spend their Saturday afternoons watching such an exciting league.

Our campaign began with a nine game unbeaten run which included our first home win of the season against our local rivals, Maidstone United. A recent run of three consecutive wins against Boreham Wood, Halifax and Solihull has propelled us forward and despite lying in 11th position; only five points separate us from Macclesfield at the top of the table.

Having only lost one game, we have proven difficult to beat as our resilience, team spirit and togetherness have shone through. It is credit to our manager, Daryl McMahon, who has created a team with a balance of young, talented individuals and experienced players whom have tasted promotion in their careers before.

With the league so closely fought and the strength of our squad, we are confident that we can make a big statement in the Vanarama National League this year.

Watch out for more stories and reports from the Vanarama National League every Wednesday.