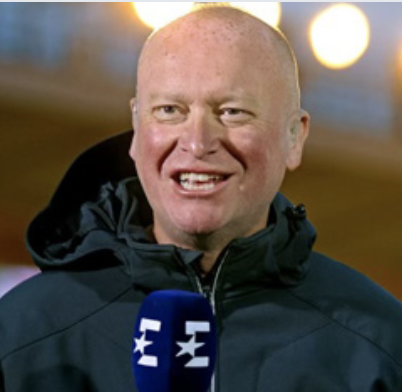 Nigel Pearson, who commentated on football, speedway and darts, was a good friend and colleague to many of our members. Sadly he passed away just earlier this month, and his great friend Ian Danter has written this moving tribute:

You usually heard Nigel Pearson before you saw him in a press room. That glorious Yorkshire-tinged accent would be booming off the walls, the big TVs and the tea caddy as you would walk in to find him nearby, usually holding court on the merits of a speedway franchise being maintained in Birmingham, why Peter Wright seemed to change his darts mid throw, never mind mid-match, or maybe about just how good Jason Koumas was down the Baggies.

When we saw each other, it always prompted the same intro: I would point and bellow in my best Nigel voice “Nigel Pearson, that’s right!!!” to which he would loudly respond in kind with “No mistake at all!!!” and following about 20 seconds more of ‘Nige’s Catchphrase Tennis’, we’d laugh, hug and actually find out how each other was doing that day. I’d promptly tease him about the Albion and he’d win by teasing me straight back about the Blues.

I’m going to miss that silly pointless, self-indulgent interaction with my friend more than you could ever know.

As I write this it’s been a week since his sudden passing, and myself and other colleagues close to him have formed a little support network to check on one another periodically-making sure all our friends were “ok”. I say ‘little support network’ but that’s not exactly true…it’s a huge support network that encompasses at least 3 major sports and numerous media outlets, all of us desperately trying to process how it is that we shall never see him again. And that disbelief is still very evident 7 days on.

Nigel once told me about his move to the Midlands as a teenager from his native Yorkshire and how his time at a Kingswinford comprehensive had not been an altogether happy time for him. He felt a little bit of an outcast loving sports like Rugby League, which barely made an imprint on the Black Country, but his drive and his sheer enthusiasm for the sports clubs he loved as a young lad (Hull Vikings speedway as well as Featherstone Rovers) were his salvation in the end as he began forging a fledgling career in written journalism writing for Stourbridge Times on speedway, a sport that really did resonate with Midlanders.

Nigel soon became a BRMB football reporter working for George Gavin (Halesowen Town v Tranmere in the Cup being his first assignment), and also blazed a trail as one of the leading lights of the notorious Clubcall service in the 1990’s – a business idea that most young fans nowadays would scoff at but it was hugely popular, and Nigel was a master at the old ‘hook and tease’ when recording his pieces on Midlands clubs for a premium rate telephone line.

I know we are the Football Writers Association, but it’s worth noting that I will never meet anyone in my life as dedicated to the furthering of speedway’s cause (both domestically and worldwide) than Nigel. When he became the main voice of the sport on TV in the 2000’s, he proved to be so good at it in my eyes that he made me forget how good Dave Lanning had been before him on World Of Sport’s coverage in the 70’s and 80’s. His commentary on Chris Harris winning the 2007 British Speedway Grand Prix in Cardiff in tandem with Kelvin Tatum is quite stunning lump-in-the-throat stuff.

There’s always that awful minority in this ‘pick a side’ social media age who occasionally made their dislike of Nige known to him in the most unpleasant ways possible. And that sometimes affected Nigel because he’d worked so diligently to raise the profile of the sport and even raise the Cradley Heathens club from the ashes to ride again. That was an incredibly proud moment for him, I know. But he still had self doubts – as all us fragile broadcasters do – as to his abilities.

But he was THAT good, BT Sport and Sky Sports allowed him to work on both channels concurrently covering speedway. Can you think of anyone else who could successfully straddle those two media behemoths at the same time and not cause a single issue? That was just one of Nigel’s strengths – his sheer versatility and his dedication to doing it right.

He also marvelled at being paired with Sid Waddell as he took his first tentative steps into PDC Darts commentary – Sid settled any nerves and told him he’d soon be covering a world final…and Sid wasn’t wrong.

Nigel’s fun catchphrases were so prevalent in his darts work. So much so that talkSPORT staff at the Hatfields office used to send him text messages whilst watching him provide coverage from Ally Pally or Winter Gardens saying “Give us a ‘right place right time’ Nige!!” and he would duly oblige within seconds at a perfect point in which to say it.

But he was a talkSPORT mainstay as the station grew its football portfolio during the 2000’s He coined the phrase “Our favourite time of the week!” for Saturday 3pm, when talkSPORT won its first ever UK Premier League rights packages. Nigel had the honour of being lead commentator for those games week in week out and always brought his distinctive voice and style to the beautiful game – and no shortage of humour and self-deprecation either.

He never minded me taking the mick out of his voice for comedic gain on talkSPORT-indeed, he championed the “No Mistake At All” memory quiz or the “Pearson About” travel quiz that I devised for various shows in his honour.  Those quizzes were just an excuse to use every catchphrase he deployed for a giggle. And he giggled at them as much as anyone did.

I remember once I even recorded an answerphone message for his mobile in his inimitable style…at his insistence! He laughed heartily as he told me of confused messages he’d received from folk after hearing my daft voicemail greeting!

Press boxes are strange places. Fleeting meetings with peers and colleagues that seem to form very strong bonds despite the lack of quality time you can truly spend with someone on a match day when you have so much to do…or at least us radio guys do in trying to get our equipment to work properly…for me, it meant that time spent in the company of people like Nigel was especially precious.

I owe him so so much for the progress I made from local to national broadcaster and so many others can say similar things about the leg up Nigel gave them at some point in their career. He was a proper team player who always wanted to bring new talent through.

In July the talkSPORT darts team will reconvene in Blackpool for the World Matchplay and Nigel won’t be there as he should, flitting between TV and radio comms with seamless skill. But I know that our pundits Chris Mason & Paul Nicholson will still indulge with me in our traditional ‘Nigel Pearson Tourette’s’ when we first see each other in the press room and start swapping his catchphrases, in just the same way I used to do with Nigel himself at The Hawthorns, Molineux or wherever our paths crossed.

Me, Nicho and Mase always did that Nige voice out of great love and huge respect for our friend. Something tells me that we will do it with extra gusto in his absence this year…and with more than a tear or two shed.

Then we’ll order a Guinness or two, maybe a balti pie, and celebrate his life. And Nigel crammed an awful lot of life into his 52 years.