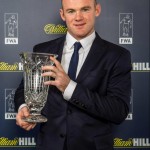 Wayne Rooney celebrated his record-breaking success in style when he was honoured at the FWA’s Tribute Evening.

Just 24 hours after becoming Manchester United’s leading goal-scorer, breaking Sir Bobby Charlton’s record which had stood for more than four decades, Wayne was guest of honour at a glittering event at The Savoy.

In front of almost 400 guests, Wayne received his trophy from FWA chairman, Patrick Barclay, who described him as a ‘genuine role model’ and paid tribute to not only the United star’s goal-scoring prowess but also his selflessness.

Patrick was joined by former England manager, Roy Hodgson, who gave Wayne the captaincy and watched him mature both as a player and a man.

Hodgson said: “When I first met Wayne, I didn’t know what to expect but I met a man who just loved to play football. Whenever a young player came into the squad for the first time, it was Wayne who put an arm round his shoulder and made him feel welcome.”

Wayne’s former United team-mate, Darren Fletcher, joined in with the praise – and talked about the competitive streak which singled him out even as a teenager joining from Everton.

“He was absolutely driven from the first training session after joining United. There are so many qualities to him and that’s what has made him the leading scorer and most capped outfield player for England and now the greatest goal-scorer in Manchester United’s history.”