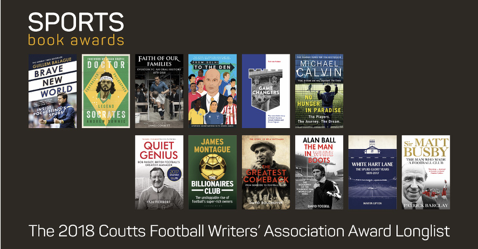 Biographies of some of the most successful football managers, past and present, dominate the Football Writers’ Association Book of the Year Award Longlist for 2018.

Now sponsored by Coutts, it is one of 10 categories within the Sports Book Awards Ceremony which takes place at Lord’s Cricket Ground on June 7th.

A total of 12 books made the shortlist, selected by members of the FWA’s books committee, and eight of the authors were present at Coutts’ offices on the Strand for a the announcement on Monday March 19th.

Sir Matt Busby by FWA Chairman Patrick Barclay and Quiet Genius (Life of Bob Paisley) by Ian Herbert will compete in the football book category with David Bolchover’s The Greatest Comeback, the story of Bela Guttmann. Each are European Cup-winning managers, a feat that remains elusive to Mauricio Pochettino, the exciting young coach at Spurs and subject of Brave New World by Sky Sports La Liga pundit Guillem Balague, another FWA member.

Stephen Constantine is a lesser-known veteran coach of six different national teams in four continents. His story, written with Owen Amos, From Delhi to the Den: The Story of Football’s Most Travelled Manager continues the strong managerial theme running through the list.

Last year’s Autobiography of the Year award winner at the Sports Book Awards, Michael Calvin who co-authored Joey Barton’s life story, is longlisted again with No Hunger in Paradise, the third part in his much celebrated trilogy of football writing. James Montague is another previous winner and his book, The Billionaires Club, takes a delve into the unstoppable rise of football’s super rich owners while Martin Lipton’s White Hart Lane provides football fans with a complete history of Tottenham Hotspur’s home  before it re-opens after redevelopment next season.

James Corbett’s Faith Of Our Families: Everton FC –An Oral History 1878-2018 is a book told by the people who made the great Merseyside club and completes the long list.

Simon Hopes, Director Coutts, in response said: ‘The business of football is very important to Coutts and we are very appreciative of the opportunity to partner with The Sports Book Awards and the Football Writers’ Association for the first time in FIFA World Cup year.’

Mike Collett, Chair of the Football Writers’ Association Books Committee, commented: “We’re incredibly impressed by the quality of this year’s football writing. So much so that we’ve decided to announce this longlist for the first time. We’re thrilled with the continued association with the Sports Book Awards team and by the new sponsorship from Coutts.

“Selecting the winner of this award gets harder every year” added Mike, “It reminds me of the Goal of the Season award — what is better a 30-yard screamer or a goal scored after a mazy run through the defence. ?  The same with these awards, the subjects are so diverse, how do you pick a winner ? The interesting part is that there are certain criteria we set, and the winner invariably meets all of them.
“The standard was so high this year that for the first time, with the backing of the Sports Book Awards organisation we have held a public Long List  launch with eight of the 12 nominated authors able to discuss their work on a panel chaired by FWA Book Committee member Philippe Auclair. It was a fantastic night at Coutts Bank, and many thanks to them and their staff for making the evening such a memorable one.”

The winners of the 2018 Sports Book of the Year Awards will be announced at a gala awards dinner to take place at Lord’s Cricket Ground on the evening of June 7th.