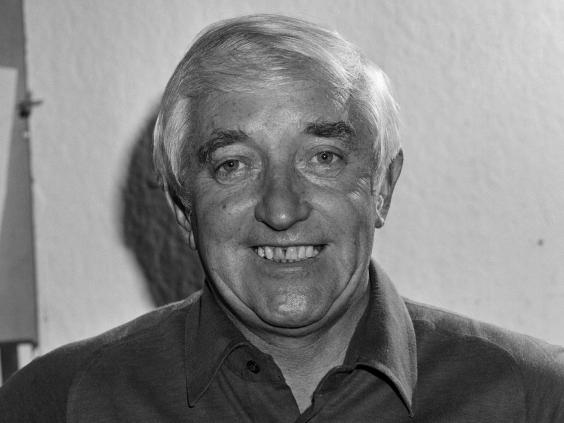 Ken Jones, our former Chairman and Life Member who has passed away at the age of 87, went back many years with Norman Giller, who recalls:

“It was just a few weeks ago that I last saw my old mate Ken Jones and his lovely wife, Kathy.  We were at the memorial service for Hugh McIlvanney at St Bride’s in Fleet Street, and we made a pact. I told him: “I won’t come to your funeral, Ken, unless you come to mine. Ok?” I shook his left hand as he laughingly agreed.

There was no right hand to shake because he lost it in an appalling train accident twenty years ago. Ken being Ken, shrugged off the handicap, taught himself to become left handed and continued to write wise and often waspish words with which he decorated the sports pages of the Daily and Sunday Mirror, Observer and The Independent.

Now I have to break our agreement, and will sadly and respectfully  say goodbye to a true master of the press box.

He has passed on just weeks after the trio of sportswriting legends with whom he shared star status – McIlvanney, James Lawton and Steve Curry. What a quality quartet for the editorial staff Up There.

Ken I go back more than 60 years. I was just starting out on my writing adventure when he was serving his apprenticeship as a journalist with the Dixon and Hayters agencies in old Fleet Street. He had turned to sports reporting late in his 20s after an ankle injury had finished a promising football career.

The Jones boy followed his father Emlyn as a lively and inventive forward with Southend United. His Uncle Bryn had been a pre-war star with Arsenal and he had a chorus of cousins who were making names for themselves on the football roundabout, including Welsh Wizard Cliff Jones, now 84 and a living legend at Tottenham, where he remains idolised.

Ken had to scribble in the shadow of Fleet Street giants Peter Wilson and Frank McGhee at the Mirror, and earned his corn with a string of exclusives thanks to his myriad of close contacts in the village world of football.

From red-hot football reporter, he eventually emerged as an authoritative and balanced all-round sports columnist, particularly readable on football and boxing. He was three times chairman of the Football Writers’ Association, and honoured by the Sports Journalists’ Association with their highest award, the Doug Gardner trophy for the continued excellence of his writing.

We travelled the world together before I tunnelled my way out of Fleet Street, and he was always a good companion and revered rival who composed his articles with an in-depth knowledge that left his readers feeling they had been there at the ringside or pitchside with him.

Amazingly, Ken was not the best writer in his family. He would bow the knee to his daughter, Lesley-Ann Jones, who became a ceiling-breaking columnist in Fleet Street in the misogynist days when women had to be twice as good as the men to get a break.

My thoughts are with Kathy and Lesley as I sit and mourn the passing of a good friend, a super sportswriter and a lovely bloke. Sadly you won’t be able to come to my funeral.  Ffawelio hen ffrind.