“If anyone comes to my funeral…”

She need not have worried. Vikki Orvice had written those words in the eulogy she had composed for herself, and was read out by her husband Ian Ridley at St Leonard’s Church Flamstead, on a beautiful, unseasonally sunny day in February.

“They came, Vikki, oh they came,” replied Ian later that day on Twitter.

Indeed we did. Hundreds turned up at the tiny church high on a hill in Hertfordshire, sitting and standing inside St Leonard’s and even filling the overflow marquee set up outside, with a live stream of the service.

And what a service it was. Vikki, determined not to let Ian have the last word, had helped plan her own funeral, but she would not have believed how beautifully this celebration of her life would play out.

The village of Flamstead played host for a day to the cream of British sportswriting, superstars of sport and the many, many friends and family who loved Vikki and owed her so much.

Paula Radcliffe, Jessica Ennis-Hill, Adam Gemili and Dina Asher-Smith were among the athletes who came to pay their final respects, as well as footballers Tony Adams and Alan Smith. A special guest, representing Vikki’s beloved Sheffield United, was the great Tony Currie, her ‘first love’ as Ian put it, and an inspirational figure.

Her colleagues from The Sun, past and present, turned out in force, and there were dozens of other friends from the world of journalism. The FWA, SJA, Women in Football, the British Athletics Writers’ Association were among those heavily represented, and we were all treated to a service that was emotional on so many levels – poignant, funny, sad, irreverent, moving and above all, inspirational.

Vikki set the tone with her own words, penned in the days before her death earlier this month, and with her distinctive voice coming through loud and clear. “The control freak in me would not let Ian have the last word,” she wrote, and you could picture her smile.

Ian then delivered his own eulogy, pitch perfect and wrought with emotion. Jacqui Oatley read a loving tribute from Seb Coe, who shared a love of Sheffield and sport with Vikki.

The Desire Gospel Singers performed “O Happy Day”, “I Say a Little Prayer”, and “Something Inside so Strong”, bringing the house down. It was inspirational stuff, and barely a dry eye in the house.

Ian signed off with the words “Goodbye, my Saturday girl,” and a final kiss.

The exit music was “The Way You Look Tonight”, played beautifully by Ian’s daughter Alex, and we all processed through the village to the cemetery where Vikki was laid to rest, with the sun shining, birds singing, and the first daffodils of spring starting to flower around us.

Ian summed it up perfectly in a tweet later that night:

“Well, that was emotional. They came, Vikki. Oh, they came. Proud of you, as were the village, your family, friends, colleagues and the sporting good and the great. 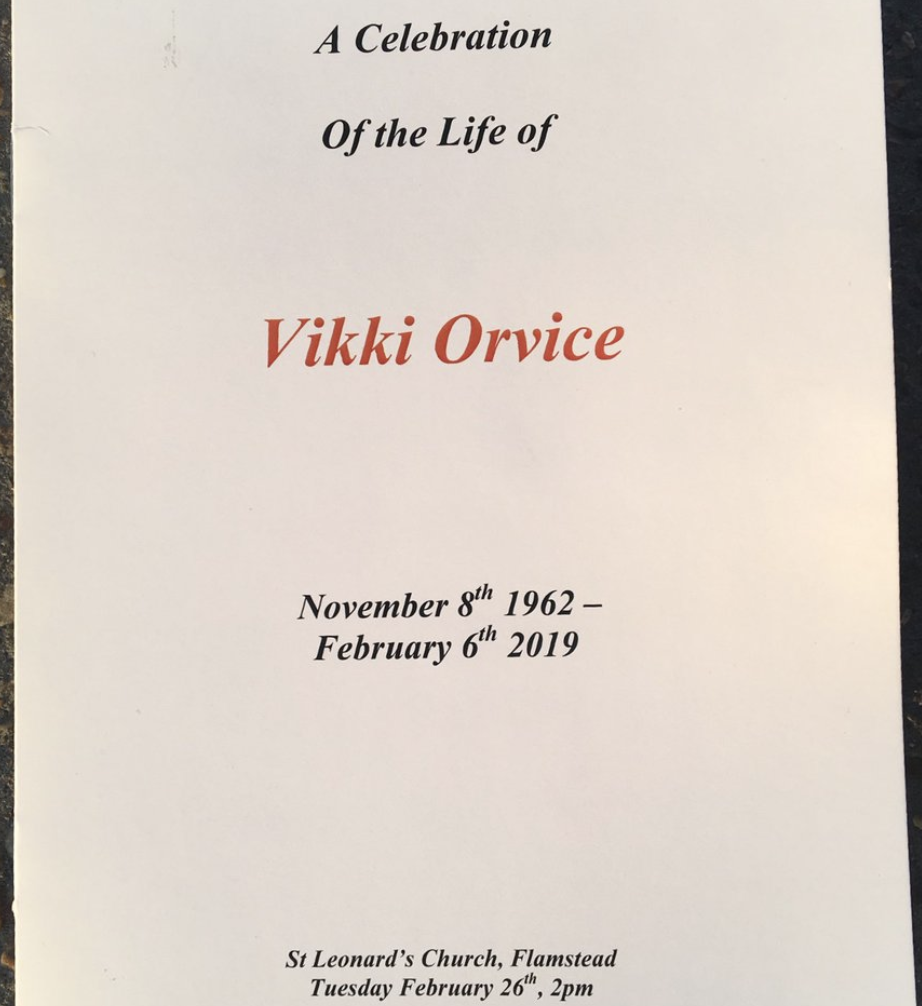