The Football Writers’ Association is delighted to announce that World Cup winner Gordon Banks will be among our special guests when we honour Pele at the FWA Tribute night on London on January 21.

Banks will join us at the Savoy Hotel in London to pay tribute to Pele when the great Brazilian flies in to receive his lifetime achieve award from the FWA. The former Chesterfield, Leicester and Stoke goalkeeper played 73 times for England and was in goal when Sir Alf Ramsey’s men beat West Germany in the 1966 World Cup final.

Arguably his greatest save came four years later, in the 1970 tournament, when he defied the laws of physics to keep out a goalbound header from Pele as England lost 1-0 to Brazil in Mexico.

“From the moment I headed it, I was sure it had gone in,” Pele has said.

“After I headed the ball, I had already began to jump to celebrate the goal. Then I looked back and I couldn’t believe it hadn’t gone in. I have scored more than a thousand goals in my life and the thing people always talk to me about is the one I didn’t score.” 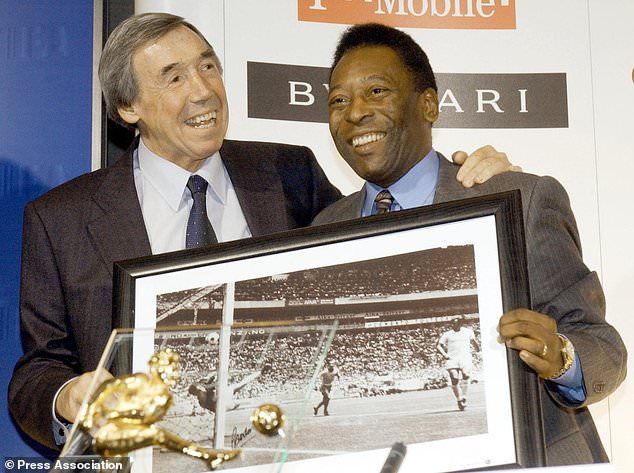 Former International soccer players England goal keeper, Gordon Banks (left) with a picture of his famous save from Brazil striker Pele (right) attend a news conference in London where they announced the 100 all time greatest footballers chosen by Pele for the celebration of 100 years of FIFA the wiorld governing body.