The novelty has worn off. It was interesting visiting all those new grounds for a while, and being the Vanarama National League’s big fish, but now all Tranmere Rovers fans want is to get back into the Football League.

The generation brought up on John King’s golden era, when the Wirral club were Wembley regulars and thrice on the brink of the Premier League, have found the adjustment to non-League status especially hard.  Older supporters, remembering the dark days of the early-mid 1980s, are more sanguine, but equally dismayed by results such as the 5-2 New Year’s Day defeat at Fylde.

That loss – to a club making swift progress under former Rovers veteran Dave Challinor – ended a run of five successive victories which had sent Tranmere hurtling up the congested Vanarama National League table. Despite a shocking start – perhaps a hangover from last season’s play-off final defeat to Forest Green – automatic promotion was suddenly back on the agenda. It still is. Though leaders Macclesfield are six points clear at the top they have not escaped the pack as did Rovers and Lincoln last season, and Cheltenham and Forest Green the year before.

Tranmere, though 11 points adrift, are already in the play-off places. With a game in hand another good run could put them in with a chance of overhauling the leaders when Macclesfield visit Prenton Park next month.

It will require courage and composure. Manager Micky Mellon – who took Fleetwood out of the Vanarama National League – has spoken of the character required to play for a club whose former status and current ground often inspires opponents. “It is easier to play against Tranmere than it is to play for Tranmere,” he claimed recently. Mellon, who has also won promotion with Shrewsbury, explained. “It is easy to get up for playing against Tranmere. We’ve got to be at it every week because everyone raises their game against us.”

While goalkeeper Scott Davies will be missed after suffering a groin injury at Fylde, Mellon has Steve McNulty to lead the way in central defence. The cult hero, a National League promotion winner with Fleetwood and Luton Town, is the defensive equivalent of Ade Akinfenwa. He may not look an athlete, but more than makes up in presence, experience and technique what he lacks in mobility.

It should help that with Leyton Orient’s demotion, Tranmere are no longer the new ‘fallen giant’. Now in their third season in the Vanarama National League there is a degree of familiarity and knowledge. Off the pitch, under former FA chief executive Mark Palios and his wife Nicola, the club is on a firm footing. Gates have held up with the 5,000-plus average higher than all but six teams in League Two. The platform is there to prosper if they return to the Football League.  First, however, Mellon and his team have to achieve the most difficult part, and produce the results to get them there. 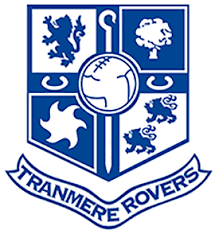