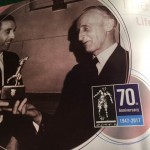 THE IVAN SHARPE LIFE MEMBERSHIP AWARD
The name of Ivan Sharpe, chairman of the Football Writers’ Association for the first six years of our existence, is not as well known today as it once was, which is all the more reason the FWA takes great pride tonight by bringing it back into the limelight with the inauguration of the Ivan Sharpe Life Membership Award at our 70th anniversary dinner.
Ivan Sharpe’s career in the game spanned almost 60 years as a player and journalist.  He played as an amateur for, among others, Watford, Glossop, Derby County, Leeds City and Leeds United, won 12 England amateur caps and in 1912 won the Second Division title with Derby and a  Gold Medal for Britain at the Stockholm Olympics.
Born in St Albans in 1889, he was working as an apprentice journalist covering sport for the Herts Advertiser and St Albans Times in St Albans when he was signed as an amateur winger for Southern League  Watford in 1907 by player-manager John Goodall, a member of the Preston team that won the Double in 1888-89. In Ivan then, there was a tangible link to the very first season of English League football.
He combined his playing time in Leeds with evening paper journalism and after his playing career ended, he turned to journalism full time, editing the influential pre-war Athletic News,  working for Kemsley Newspapers and the Sunday Chronicle, He edited the pocket bible Football Annual  for more than 30 years as well as writing an influential column in the Wolves programme throughout the 1950s and 1960s.
He covered the first Wembley FA Cup final in 1923, interviewed Benito Mussolini and according to one old source, “he also had an interview with Adolf Hitler lined up but the Fuehrer chickened out.”
He was clearly a man way ahead of his time too, advocating in the Athletic News in April 1930 the idea of a “goal judge stationed at each goal.” He wrote: “This goal-judge’s duty is to watch all incidents inside the penalty area at his end, and to advise the referee concerning all doubts. The referee, as now, to be supreme.” It only took UEFA 80 years to heed his advice.
The FWA was formed on September 22, 1947 on board a cross-Channel ferry the day after a Belgium-England international with Charles Buchan (News Chronicle), Frank Coles (Daily Telegraph) and Roy Peskett (Daily Mail) asked to draft the rules.  Ivan was appointed the first chairman a month later and held that position for six years before becoming  chairman again in 1959-60 and 1960-61. He was also made Life President, a position he held until 1968 when he died in Southport aged 79.
A fire some years ago destroyed all of our historical records but after painstaking research over the last four years, we are now delighted to include the names of all the chairmen of the FWA for the first time and to honour the life and career of Ivan Sharpe with our Life Membership Award named in his memory.
The first recipients, named at the Footballer of the Year dinner on May 18, are Ray Robertson, founding member of the North-East branch of the FWA, Patrick Collins, one of the finest sportswriters of our age, and Paul McCarthy, former FWA Chairman and current Executive Secretary.
Mike Collett
FWA National Committee