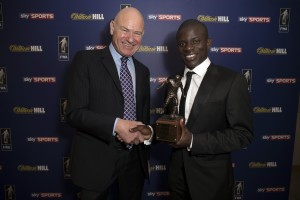 N’Golo Kante collected his Footballer of the Year award in the same classy and unfussy manner he displays on the pitch, on a memorable FWA night at the Landmark Hotel, London on May 18.

The Chelsea midfielder won the FWA vote as the season’s outstanding player, beating his team-mate Eden Hazard into second place, while Tottenham’s Dele Alli was third.

Kante was humility personified as he made a gracious acceptance speech praising his team-mates for the rapid rise he has made from lower division French football to winning the Premier League twice in succession.

The former Leicester City midfielder said: “It is special because I couldn’t even say I am the best player, but it’s a great honour. It is not only me. I owe so much to my team-mates because we have achieved so much together this season and we still have the FA Cup final.

“A few years ago I was playing in the French lower divisions. Five years ago I wasn’t even professional, so to receive this kind of award means I am the kind of player I cannot even imagine being here.”

Former Footballer of the Year Pat Jennings was one of the speakers and said that he would love to see Kante at Spurs. “Two Premier League titles, one with Leicester last year, and one with Chelsea this year.  You don’t fancy Tottenham next year do you?” joked the gentle giant.

Graeme Souness admitted he would not have liked to have been playing in the same era as Kante, because the Frenchman was so good.

And Chelsea’s technical director Michael Emenalo joked that he sent flowers to Leicester City after capturing the influential midfielder. “It is ridiculous to think that N’Golo Kante can improve, given the fact that he has improved two fantastic clubs and helped them win titles in the last couple of seasons,” said Emenalo.

“I want to express the great pride that I and the football club have to be able to say that this wonderful player, this wonderful person, is a part of our organisation.”

Patrick Barclay, the FWA’s Chairman, drew comparisons with the great Sir Stanley Matthews, the first winner of the award, as the Association celebrates its 70th anniversary.

“Sir Stan was perhaps the most magnetic of English footballers. People of all club allegiances used to follow Stanley Matthews, and now people of all allegiances gravitate towards you, they admire the way you play the game,” he told Kante.

“That somehow links together these two very different footballers 70 years apart. You bring together the English football community in admiration of the way you play the game. No fan in the country will begrudge you this award.”