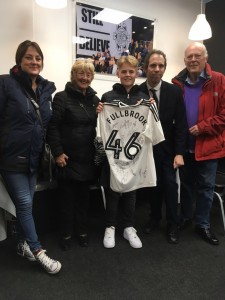 Danny sadly lost his battle with cancer in 2012 but his legacy lives on through the work of the Danny Fullbrook Fearless Foundation. The Fulham Supporters’ Trust wanted to ensure that Danny’s family and friends were aware of just how fondly Danny is thought of by the Fulham fans and the football club. The Trust’s communications officer Dan Crawford, whose own path into sports journalism was inspired by Danny, handed over the signed shirt at Craven Cottage on the evening of the game against Hull.

Dan, pictured with Danny’s parents Jim and Sylvie, sister Jo and son Edward, said: ‘Danny’s infectious enthusiasm for football and Fulham left a lasting impression on everyone he met. He was a massive supporter of the ‘Back to the Cottage’ campaign and the Fulham Supporters’ Trust and encouraged me as a teenager to pursue a journalistic career. We are very keen to support the work of the Fearless Foundation and ensure that Danny’s legacy will offer more opportunities for young people through sport and sports journalism. We would like to thank Carmelo Mifsud, Mark Maunders, Alistair Mackintosh and Slavisa Jokanovic at Fulham Football Club for arranging at such short notice to provide this shirt to Danny’s family, which shows how specially he is still thought of at Craven Cottage’.
The Trust will be working with Danny’s family, friends and colleagues over the forthcoming months on a number of projects dedicated to his memory. If any FWA member would like more information, they are welcome to email info@fulhamsupporterstrust.com