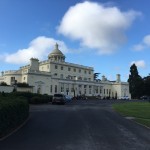 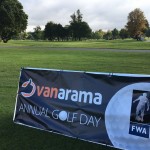 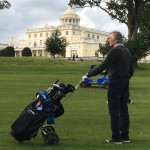 The magnificent Stoke Park golf course in Buckinghamshire will always be renowned as the venue for the famous feud between James Bond and Goldfinger.

But for the Football Writers Association, it is quietly growing its own history after six years now as the breathtaking venue for the annual FWA Golf Day.

The event is one which brings together those who write and broadcast about the game with those who play and coach at every level, and this year saw a record field of 21 fourball teams competing.

At the FWA we were proud and pleased to welcome Vanarama (www.vanarama.co.uk) as new sponsors for the event to herald what we hope will be an ongoing partnership that will supply benefits to our members through the opportunity to take advantage of the company’s highly competitive vehicle leasing rates.

Vanarama began their partnership by kindly donating a superb Vauxhall car as a prize for anybody lucky enough to score a hole in one at the Seventh, Stoke Park’s most famous par three modelled on the iconic 16th at Augusta.

Several came within a few inches, but nobody was able to drive off with the prize on this occasion.

With everybody playing off ¾ of their normal handicap on a demanding Championship course, scoring was tough.

However first prize was one by a team led by Chesterfield FC’s head of media and communications Nick Johnson, whose side comprising Ken Perkins, Kevin Reynolds and Paul Morton compiled 78 points.

The historic Joe Melling Memorial Trophy, competed for in an individual competition for FWA members only, was won by Sunday Post football writer Adam Lanigan who scored 30 points.

Thanks to FWA National Committee member Ralph Ellis for organising the day, and this report.